When It Flies, Someone Dies! " The Bat " with Vincent Price 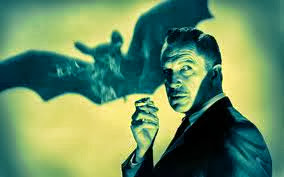 Since I'm 3 days behind on our 31 days of classic horror films, and since it's Sunday and everyone in Seattle is bummed that the Seahawks lost, I though I'd throw in another great Vincent Price classic! I'm already laughing at the hysterical lines in the movie as I watch while I write!

Here is a summary of the movie, via the awsome and unmatched WiKi....

Cornelia Van Gorder (Agnes Moorehead) is a mystery author who lives in a town terrorized by a mysterious murderer known only as "The Bat". The Bat is said to be a man with no face who murders women at night by ripping out their throats with steel claws. Early in the film, The Bat enters Van Gorder's house and releases a bat, which bites van Gorder's maid Lizzy (Lenita Lane). With Lizzy in a panic, fearing she may now have contracted "the rabies", an outbreak of which local papers have reported, Van Gorder calls her doctor, Dr Malcolm Wells (Vincent Price), who is conducting research on bats.
Meanwhile, the whole town is searching for a million-dollar stash of looted bank securities that were recently stolen. Dr. Wells discovers the location of the treasure when the thief confides in him. Wells then murders the thief in cold blood, presumably so that he can take the treasure for himself, which he believes to be hidden in van Gorder's house.
A series of break-ins and murders by The Bat brings the local chief of detectives, Andy Anderson (Gavin Gordon) to the Van Gorder house. The Bat then murders two people in the Van Gorder house, Mark Fleming (John Bryant) and Judy Hollander (Darla Hood). Anderson attempts to determine the identity of The Bat, suspecting both Wells and Van Gorder's new butler, Warner (John Sutton). Wells is removed from suspicion, however, when he is murdered by The Bat in his lab.
Miss Van Gorder cleverly manages to capture The Bat inside the secret room in her house. The Bat shoots a detective named Davenport (Robert Williams), he is then shot by Warner. Warner unmasks The Bat and he is revealed to be Lieutenant Anderson. 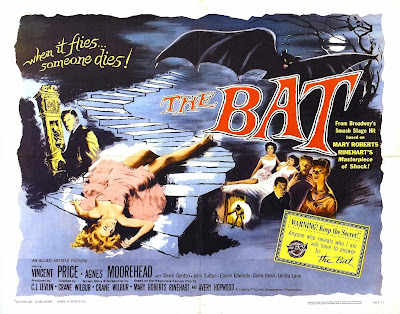 Football season comes and goes but classic horror is forever...enjoy!