The Mansion of Madness: 31 Days of Classic Horror Cinema on Xanaland 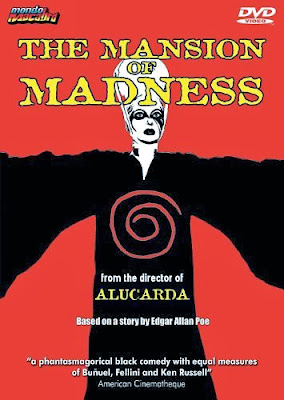 The Mansion of Madness is a wild, wacky thing. Once I would think I’d finally put my finger on what the hell was going on, it switched gears and went somewhere completely different. Based (very loosely, which should be obvious) on Poe’s story “The System of Doctor Tarr and Professor Fether,” the film starts with Gaston LeBlanc recounting the mysterious death of his parents; when he says “But, that’s a story for another time,” he means it, and it’s never mentioned again. LeBlanc, his friend Couvier, and Couvier’s cousin are traveling to Dr. Maillard’s insane asylum in the middle of nowhere, as LeBlanc wants to write a newspaper article on the asylum, and Couvier and Dr. Maillard are old friends. Once they reach the grounds, Couvier and his cousin turn back, and LeBlanc gets the full tour of the place, where Dr. Maillard is perfecting his “soothing” method of treating mental illness. To explain much more about the plot would really be to spoil the fun for those who haven’t seen it; anyhow, I’m not really sure I could explain much more if I wanted to.

Bunuel favorite Claudio Brook plays Dr. Malliard, and it’s quickly obvious there’s something off about the doctor. There’s a Rousselian quality to the asylum that develops nicely over the course of the film. It’s hard not to wish the whole film took place within the walls of the asylum, as the wacky screwball factor increases tenfold when it’s Couvier and his cousin trying to escape the sentries. Location is critical when shooting a film like this, and the asylum doesn’t disappoint: subterranean dungeons, decrepit industrial machinery, baroque parlors complete  with harps and stuffed alligators, corpses in glass display cases, it just gets better and better. I suspect this is in no small part due to the influence of Leonora Carrington, who was the art supervisor, and there’s scenes in this film which could have come directly from one of her paintings.

Having only seen Moctezuma’s Alucarda before, I wasn’t really ready for the surreal zaniness The Mansion of Madness offers. One moment, it’s in pure Jodorowsky territory, with a beautiful woman wearing an eyeball headpiece doing a dance with a baobab root (I know) and a surreal hippie band playing behind her; the next, it’s inundating the viewer with 20 minutes of Benny Hill-esque chase scenes, complete with goofy music.

Perhaps the strangest thing about this film is the score by Nacho Mendez, best known for his work with Moctezuma’s pal Alejandro Jodorowsky for El Topo. At times pitch-perfect (the glum march that begins the film), at times ridiculously farcical (pretty much anything in the forest), it can be distracting in the same certainly intentional way as Hess’s score for Last House On The Left.

The movie is most effective, in my opinion, when it gathers all the inmates together and lets them revel in their madness. The last 20 minutes of the film is taken up in this manner, and reminded me of Pasolini’s Salo at times – the formal setting juxtaposed with the insanity is really unsettling. That is, until the chicken dance. Wait until you see it. The Mansion of Madness is unapologetically surreal, for better or for worse. It’s probably the most interestingly insane Poe adaptation we’ll watch this month, that’s for sure.

The Mondo Macabro dvd is quite nice, with an overview of Moctezuma’s work and an interview with Guillermo del Toro  (the same ones as on the MM edition of Alucarda) — you can also find the American cut of this film under the title Dr. Tarr’s Torture Dungeon on assorted Mill Creek collections. Absolutely worth watching unless you’re a Poe literalist or don’t like “confusing” films.
by Gustav LeVon

Here's a fake fireplace to curl up by since your probably
watching this alone....like I am!