The Devil's Rain! 31 Days of Classic Horror Cinema on Xanaland 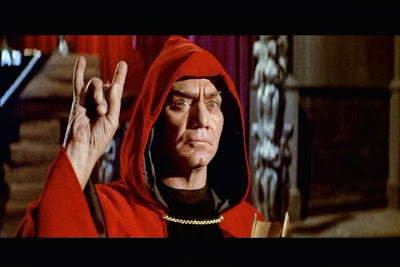 Yep, he's at a Witchburn show!

Teasing, if they had been around that long they's be immortal! Wa Ha Ha Ha, guess we'll find out in another 30 years!

Here's a summary of the movie via the awsome WiKi, because like the 70's song say's " nobody does it better, makes me feel sad for the rest "

A curse hovers over the Preston family, caused by their betrayal of the Satanic priest Johnathan Corbis (Ernest Borgnine). Corbis has followed the Preston family for generations, in pursuit of a Satanic book through which he obtains great power. Corbis first captures the father, Steve Preston, who is allowed to escape home to warn his wife and younger son about Corbis's wrath, and to tell them to give the book to Corbis; at which point Steve Preston then melts into a waxy substance, apparently melting in the rain. 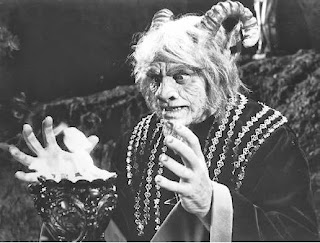 Mark Preston (Shatner) takes the book, hoping to meet with Corbis and defeat him. The two eventually meet in a ghost town in the desert, where Corbis gives Preston a drink of water from an old hand-pumped well; Preston drinks and then spits it out, proclaiming the water to be bitter. Corbis smiles and replies, "Sweet way to end a thirst, though."
Following that, Preston challenges Corbis to a battle of faith, which ends with Preston pulling a 1911 .45 pistol on Corbis. Corbis asks, "Is THAT your faith?" at which point Preston tries to escape. Surrounded by satanists, Preston pulls out his cross, which then appears to transform into a snake, and he discards. He is promptly captured by the Satanic followers of Corbis. Corbis later begins a ceremony which wipes Mark's memory clean with the "water of forgetfulness" in preparation for a ceremony later that evening. 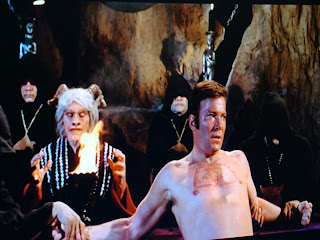 Meanwhile Preston's older brother, Tom (Tom Skerritt), and his wife Julie, have gone to look for Mark; they are accompanied by Dr. Sam Richards (Albert), a psychic researcher. Tom witnesses his brother's total conversion to a Satanic puppet in a ceremony in which Corbis is so completely taken over by the devil that he transforms into a goat-like being. Tom is discovered but escapes the Satanists, and later meets up with Richards at the Satanic church, where they discover the source of Corbis's power—a porcelain container known as The Devil's Rain, which contains the souls of Corbis's converts.
Corbis and the Satanists then arrive at the church, and Richards threatens to destroy the Devil's Rain, which he then does, and makes good his escape. The Satanists melt in the rain as a storm rages as Tom and his wife make a hasty exit. As Tom holds his wife, the audience discovers that it is actually Corbis he is embracing and his wife's soul has become trapped within a new Devil's Rain. 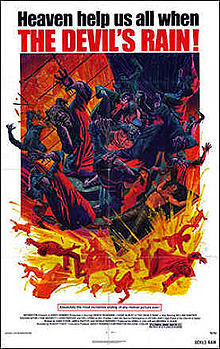 Now, go curl up with your fake girlfriend ( not provided )
throw a log on the fake fire ( provided )
and have a wonderful pre Halloween movie night!