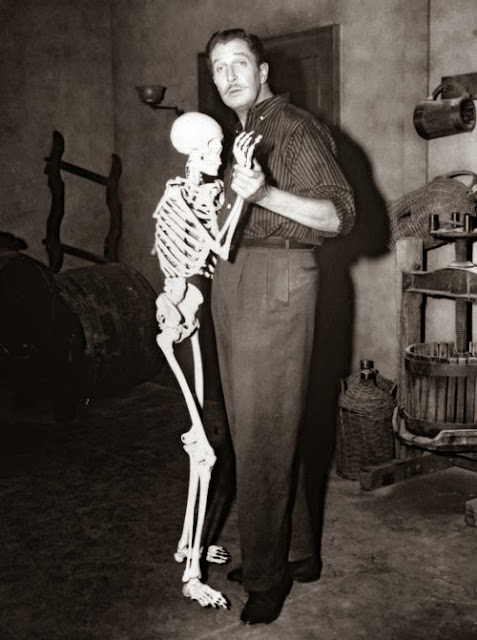 Well, Breaking Bad is sadly over...and the football game is almost over...your team lost anyhow, ha ha ha...so may as well get snuggled in and watch a classic scary movie! This movie is not horrifying, but what would be would be finding out a friend of mine had not seen it, and I am talking about the original, although I quite enjoyed the remake.

Here's a summary, via WiKi, becasue no one writes them better....

Eccentric millionaire Frederick Loren (Vincent Price) invites five people to a "party" he is throwing for his fourth wife, Annabelle (Carol Ohmart), in an allegedly haunted house he has rented, promising to give them each $10,000 with the stipulation that they must stay the entire night in the house after the doors are locked at midnight. The five guests are test pilot Lance Schroeder (Richard Long), newspaper columnist Ruth Bridges (Julie Mitchum), the house's owner Watson Pritchard (Elisha Cook), psychiatrist Dr. David Trent (Alan Marshal) who specializes in hysteria, and Nora Manning (Carolyn Craig), who works for one of Loren's companies. 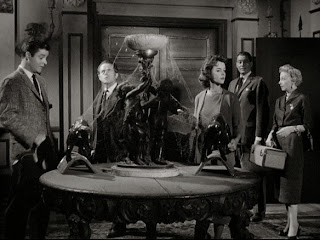 Arriving late at night in separate funeral cars with a hearse leading the procession, Loren's guests are told the rules of the party, and each is given a .45 caliber pistol for protection. Forced to attend the party, Loren's wife tries to warn the guests that her husband is psychotic, causing them to be very suspicious of him. Nora becomes convinced that he's trying to kill her when she keeps seeing frightening apparitions, including the ghost of Annabelle, who had apparently hanged herself some time during the night.
Almost as frightened as Nora is Watson Pritchard. He is convinced that the house is genuinely haunted by the ghosts of those killed there in the past, including his own brother, and that those ghosts have the power to "come for" (kill) anyone in the house. Schroeder is attacked in a basement room, but is convinced his attacker was real, and tries to calm Nora's fears. 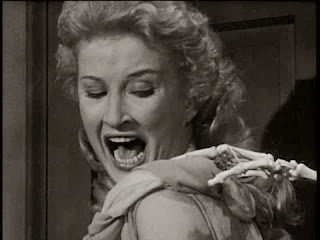 It is eventually revealed that Annabelle, in league with her lover, Dr. Trent, faked her death in an attempt to frighten Nora so badly that she will be compelled to shoot Loren. After being driven into a fit of hysteria by the repeated frights she has experienced during the night, Nora, seeing Loren walking toward her in the basement with a gun in his hand, does indeed shoot him. After she flees the room, Dr. Trent slips in and tries to get rid of Loren's body by pushing it into a vat of acid there (which had been used by a previous resident named Norton to kill his own wife), but the lights go out, and the sounds of a struggle and splash are heard.
Hearing the gunshot, Annabelle rushes down to the basement to confirm that her husband is dead, but finds the room empty. Suddenly, a skeleton rises from the acid accompanied by Loren's disembodied voice. As the animated spectre approaches, Annabelle recoils and screams in horror, accidentally falling into the acid herself. The real Loren then emerges from the shadows, holding the contraption that he used to manipulate the skeleton. Triumphant, he watches Annabelle dissolve in the acid. 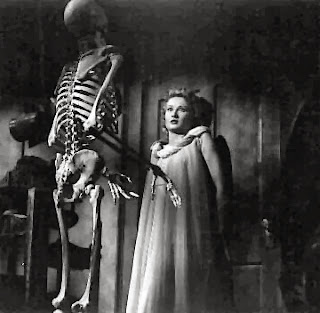 Nora tells the other guests that she has shot Loren in the basement, but when they all arrive there they find him alive. He tells Nora that the gun she fired at him had been loaded with blanks, and explains to his guests that his wife and Dr. Trent had been trying to kill him and that they have each met their end in the vat of acid, adding solemnly that he is "ready for justice to decide" his guilt or innocence.
Watson Pritchard, still an avid believer in the supernatural, looks into the acid and declares that Annabelle and Dr. Trent have now joined the ranks of the house's many ghosts. With a terrified expression on his face, he announces that the ghosts are now coming for him, then, breaking the fourth wall, he turns toward the camera and adds, "And then they'll come for you."

Enjoy...and remember there are other ways out of a bad marriage besides killing your mate!