Bride of the Gorilla: 31 Days of Classic Horror Cinema on Xanaland 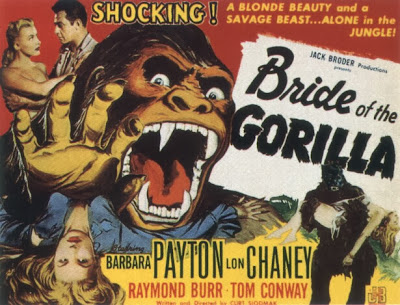 It would not be a classic gorilla gone mad movie if it did not take place in the jungle and with a helpless blonde! 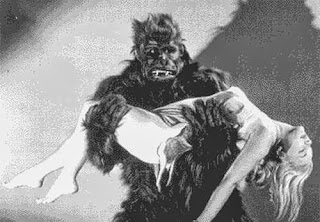 Let's see what WiKi has to say about it:

Deep in the South American jungles, plantation manager Barney Chavez (Burr) kills his elderly employer in order to get to his beautiful wife Dina Van Gelder (Payton). However, an old native witch witnesses the crime and puts a curse on Barney, who soon after finds himself turning nightly into a rampaging gorilla. When a wise but superstitious police commissioner Taro (Chaney) is brought in to investigate the plantation owner's death and a rash of strange animal killings, he begins to suspect that all is not as it seems. Dina is also becoming suspicious with Barney, who seems to be more in love with the jungle than with her. She follows him one night into the jungle, only to be attacked by the feral Barney. The police chief follows her screams in the jungle and shoots Barney.

So put another log on the fake fire I have so generously provided and enjoy!