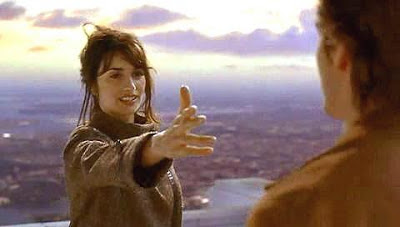 Can you believe it’s been more than 11 years since Vanilla Sky was released? Lets see what Cammerons inspiration was,  which includes an unlikely connection to Mr. Elvis Presley. Enjoy…


So lonely I could cry
How Elvis inspired my new movie, Vanilla Sky.
I once heard a taped radio interview with the young Elvis Presley, conducted backstage after one of his first concerts. In the interview Presley attempted to tell a probing and sceptical disc-jockey how his explosive new popularity was affecting him. “I feel lonely,” Presley said, “even in a crowded room.” It was that idea that began my adaptation of Alejandro Amenabar’s Open Your Eyes. 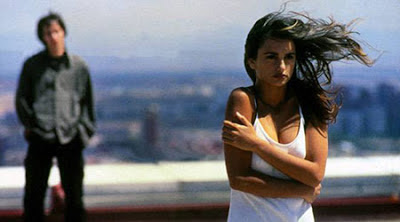 Amenabar’s original film felt like a brave and chilling folk song set in cinema. In the days after completing Almost Famous, the opportunity to keep our film-making team together was too attractive to pass up. I’d always written my own original screenplays, but Open Your Eyes, with its open-ended and impressionistic themes, felt like a great song for our “band” to cover.
I also had another hunch. After working with Tom Cruise on Jerry Maguire, and watching his work deepen powerfully in movies like Eyes Wide Shut and Magnolia, I knew there was a big and boldly modern performance inside of him, waiting to occupy the centre of our adaptation. Cruise had been a big fan of Open Your Eyes, and agreed that we could honour the original and add some new chords of our own. Our journey began. 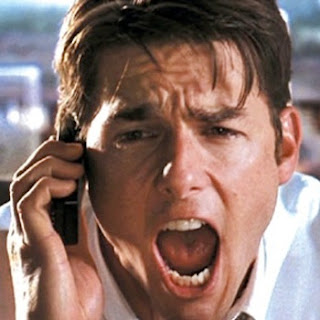 The name of the main character, a privileged New York ladies man, was based on someone I’d known in school. David Aames. The real David Aames, whose name wasn’t exactly David Aames, was more than a person. He was a brand name for a life we all wanted. He was never called by his first name, it was always “David Aames”.
In our film, “David Aames” would be the 33-year-old son of a grand Manhattan publisher who’d suffered a fatal car accident (along with Aames’ mother) and left “the keys of the kingdom” to him, the one heir who had little knowledge of what to do with it. More adept at snowboarding than commanding the authority of a publishing empire, David Aames moves blithely through his inherited life. And always, perhaps especially when surrounded by adoring women and scene-makers, there is an odd loneliness within him. The melody of a more fulfilling life is always just beyond his earshot. Aames’ life, meanwhile, is defined like so many of us, by pop culture. But where does a real life begin, and where does pop culture 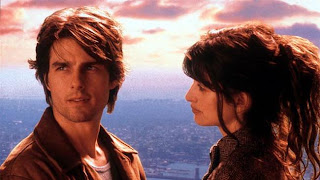 The title Vanilla Sky comes from a nickname David Aames has given to the painted clouds in an original Monet left to him by his mother. In ways he could never imagine, that sky returns later to help define who he is. The title always felt right for our adaptation. Vanilla Sky is a feeling, a state of mind, a dream of a life that may or may not actually exist. 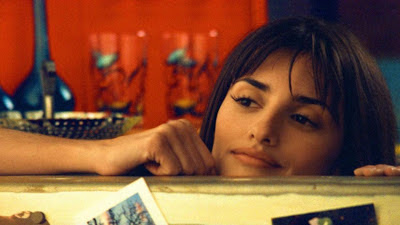 Okay, I just like the way the words sounded.
There were other early clues as to what I wanted our movie to be. A Nashville songwriter named Julie Miller had written an intoxicating acoustic ballad called “By Way of Sorrow”. It felt like our movie’s tone. And always, along with that haunting Elvis Presley interview, was an image I knew we needed. In the first sequence of the movie, David Aames is explaining a dream in which he is apparently the last man alive in the world, abandoned and running wildly through a fully electrified but empty Times Square. 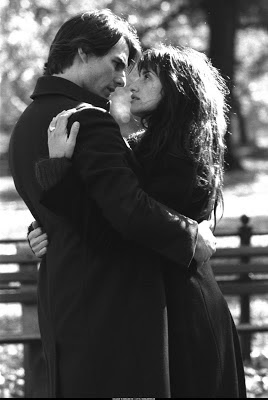 Along with cinematographer John Toll, we mapped out the shot and a soulful modern visual style for the entire movie. The production took shape quickly. It was the winter of 2000, and every working film-maker seemed to be on a fast-track to beat an impending Actors’ and Writers’ Guild strike. The strikes never happened, but the adrenalised nature of the scriptwriting and filming seemed to match the urgency of the movie we wanted to make. Within weeks of finishing this screenplay, there we were on Times Square, an early Sunday morning in November. Tom Cruise as David Aames was racing through the most famous geography on the globe. Utterly alone. Watching the shot as it happened on a video monitor, the whole world of Vanilla Sky was still ahead of us. Lonely. Scary. Promising. Inevitable. It felt, in fact, like a very vivid and psychedelic dream come true. It felt like our song.
Courtesy of The Guardian UK - Cameron Crowe *