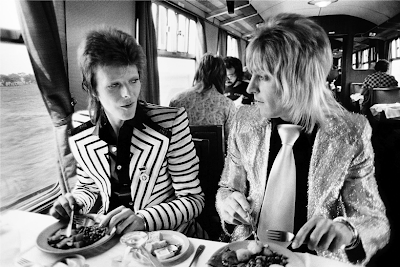 “Everybody likes David Bowie, and everybody likes Iggy Pop… so what if we put them together?”
I doubt thinking behind such a small project would, in fact, be so silly, particularity since it’s one with exploration-worthy historical roots. As big fans of both Bowie and Pop are sure to know, the two icons of ’70s rock devoted time to healthy creative collaboration, writing, recording, and even touring together over a period of roughly two years. (That they might have shared some mutual illegal interests is both beside the point and, given the time, of no shock.) When set against that era’s unbelievably atmospheric West Berlin, a movie about all their relationship isn’t such a terrible idea.
It’s the thinking of Gabriel Lange (director of the absurd “what if” piece Death of a President), who, per THR‘s word, has been given funds to direct Lust for Life, a biopic account that Egoli Tossell Film will produce in conjunction with Altered Image. The screenplay, from writer-producerRobin French, is sure to hit many of the beats listed above — expect some loud scenes of Bowie performing Station to Station in front of a fake crowd — though anything else which could, theoretically, lie within hasn’t been divulged. (It’s early, after all.) There is, however, one exception: as would be indicated above, I’m glad that producer Egoli Tossell would stress the importance of ’70s West Berlin in relation to Lust for Life‘s emotional core. If nothing else, it’s something forLange to take advantage of in crafting his visual palette.
For him, though, there’s also the task of finding actors worthy of stepping into Bowie and Pop’s shoes. In that department, best of luck.
* story courtesy of Nick Newman at The Ticket Stage*
Posted by xanaland at 9:38 AM