The Breakfast Club 27 Years Later Where Are The Stars From This Iconic Movie? Classic cast: The Breakfast Club was a big hit back in 1985 and the cast are now celebrating the 25th anniversary of the film's release. Pictured (back row) Judd Nelson; (middle row, l to r) Ally Sheedy, Anthony Michael Hall, Emilio Estevez; and Molly Ringwald
Enlarge All grown up (l to r): Hall, Ringwald, Sheedy and Nelson reunited for the anniversary screening on Monday night. They also paid tribute to the film's director John Hughes, who died last August
And the only missing face was the athlete - played by Emilio Estevez.
The cast were also reuniting to remember the movie's late director John Hughes who died of a heart attack, aged 59, last year.
They had also gathered at the Oscars last year along with other actors who told anecdotes about working with Hughes.
The story follows five teenagers, each a member of a different high school clique, as they spend a Saturday in detention together.
They come to realise that they are all deeper than their respective stereotypes. The princess: Molly Ringwald, 42, played Claire Standish, the rich girl in the movie. Still recognised for that role 25 years later, she is currently starring in the award-winning TV show The Secret Life Of The American Teenager The brain: Anthony Michael Hall, 42, played Brian Johnson, said to be based on director John Hughes. He has since starred in films including Weird Science, Edward Scissorhands and The Dark Knight - and played the lead in the TV version of Stephen King's The Dead Zone. Hall is now sober after battling a drink problem
The film has become a cult classic and had a big influence on many coming-of-age films since then.
The actors have had varying success since starring in their break-out roles.
Molly Ringwald, 42, played princess rich girl Claire Standish in the film.
The actress is currently starring in award-winning TV show The Secret Life Of The American Teenager and says no film has come close to what they achieved.
'There's been nothing to replace it. Until something comes along that can hold a candle to these movies, they will continue to be what they are.' The criminal: Judd Nelson, 50, played bad boy John Bender. His film roles since include Airheads and Jay And Silent Bob Strike Back. In 1996, he starred in TV show Suddenly Susan with Brooke Shields which ran for four years. He stars in nine upcoming films, including Brookwood Sleazebags which he is also producing The basket case: Ally Sheedy, 48, played crazy girl Allison Reynolds in the iconic film. She went on to suffer with her own demons conquering a sleeping pill addiction. She has guest-starred in TV shows CSI and Kyle XY
Anthony Michael Hall, 42, starred as the brain. He has since appeared in movies such as Weird Science, Edward Scissorhands and The Dark Knight.
Hall also took the lead role in the acclaimed TV version of Stephen King's The Dead Zone.
He played the nerdy Brian Johnson whose character was said to be based on John Hughes.
Hall is now sober after battling a drinking problem but credits Hughes in giving him his start in Hollywood. School scene: In The Breakfast Club, the actors played five teenagers with stereotypical high school personalities who spend the day together on detention


The soundtrack song, and if your lucky the soundtrack
song for your time in high school, go class of 86! 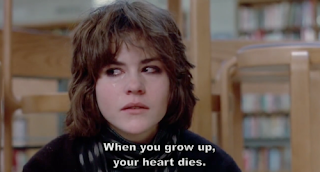