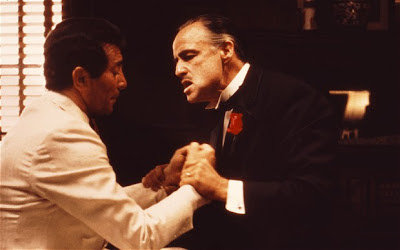 "Fredo, you're my older brother, and I love you. But don't ever take sides with anyone outside the family again. Ever." For all its twisted characters, deplorable acts, and avarice-fueled plotlines- "The Godfather"
and its sequels have one principle emphasized over all others. The importance of family. Above all else a man is to be loyal to and take care of his family. It was this classic trio and its message of obligation to family that built the foundation of my love of cinema.

Few modern movies examine the depths of human psyche as "The Godfather" did. Growing up the parables and romanticized history of Disney alongside the mindless entertainment of Godzilla films, it was The Godfather that first offered a sophisticated, thought-provoking film to me. My perspective and appreciation for cinema was forever changed. The concepts of morality and family were at the forefront of every scene, every plot twist.

Is it right to do something wrong if it is for the well-being of your family? Is it right to steal of loaf of bread to feed your starving family? Supposing they don't like bread- suppose they like casinos, brothels, and alcohol? Perhaps not directly, but the revenue attained from them? The concept of prioritizing family is at the forefront of all three Godfather films and it's an understatement to say that lines are crossed. If it is right for you to feed your family, is it also right for you to avenge a family member? Is it right for you to remove a family member if it ultimately benefits the rest? Does an amputee not ultimately survive thanks to the sacrifice of a leg or arm? So many moral questions are raised by the tales of the Corleone family. Before I saw the Godfather films, I'd had a passing affinity for cinema. It was the breath-taking depth and sophistication that bred my appreciation for movies in general. The questions and considerations raised by the presentation of Mafioso ideology spurred me to other films inside and outside the genre.
Watching the first film offers the most acceptable answers to these philosophical, filial questions. Michael Corleone, faced with the potential destruction of his beloved family, essentially sells his soul to a life of sin in order to protect them. He orchestrates murders, manipulates those around him, and sacrifices part of his humanity to take on the burden before him. His brother murdered, his sister beaten, and his father barely alive- Michael had no choice. Put in his place, would any devoted family man shirk away from the same path?
"The Godfather: Part II" is a bit more controversial than the original. The stakes are raised, but the risk is diminished. While the Corleone family is threatened, they are much stronger than they once were. Michael 's true threat is not an outside source, but those around him. A wife that can no longer love him for what he has become. A brother that has unwittingly betrayed him out of greed. A sister that can't stand to look at him, but won't hesitate to ask for money. Michael managed to save his family before, but at what cost? Those he loves now see him as a monster. It begs the question- is it better to be loved or respected? 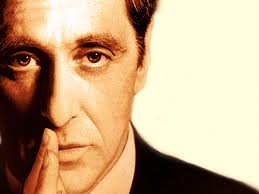 In the end, Michael chooses the latter in order to preserve what he has left. This choice he later regrets more than any other- as we find out in "The Godfather: Part III." Viewing the second chapter of Michael's epic, we see the consequences of his decisions. The animal that he has become. As an older brother and a son, I know too well the feeling of resentment when what must be done is done. When the time for play is ended and the start of business must be initiated by you- no matter what the consequences. More than anything else, Michael regrets his final decision on his brother. While it was necessary in order to abate future blunders on Fredo's part, it still haunts Michael. The third film explores Michael's pursuit of redemption and penance.
The cycle is complete- the ongoing struggle between doing what is right and what is best. No other medium can better convey the vicious cycle than the Godfather trilogy. Anyone that is willing to confront these philosophical quandaries shouldn't hesitate to pick up the set and consider the paradox that is presented by the combination of morality and family. Put simply, the three films opened my eyes to the prolific nature of cinema.
Posted by xanaland at 8:10 PM